The day a legend arrived on public transport

The day a legend arrived on public transport

The late American singer and actor Bing Crosby is the subject of Jimmy Cricket’s latest column in the Preston-based Lancashire Evening Post.

Well-known entertainer Jimmy recalls when Crosby, “none other than the Old Groaner himself”, used public transport instead of a limousine when he appeared in a show in Preston in the late 1970s.

Crosby’s trademark bass-baritone voice made him one of the best-selling recording artists of the 20th century, with more than half a billion records in circulation – including probably his best known, White Christmas.

“The reasons why Bing took the train instead of plumping for a chauffeur-driven limo are shrouded in mystery, but my guess is that he was a regular guy who liked mixing with ordinary people,” says Jimmy.

Northern Irish comedian Jimmy  is headlining Snow White and the Seven Dwarfs at the Charter Theatre in Preston – where he made his pantomime debut in 1981 – over the Christmas and New Year period. 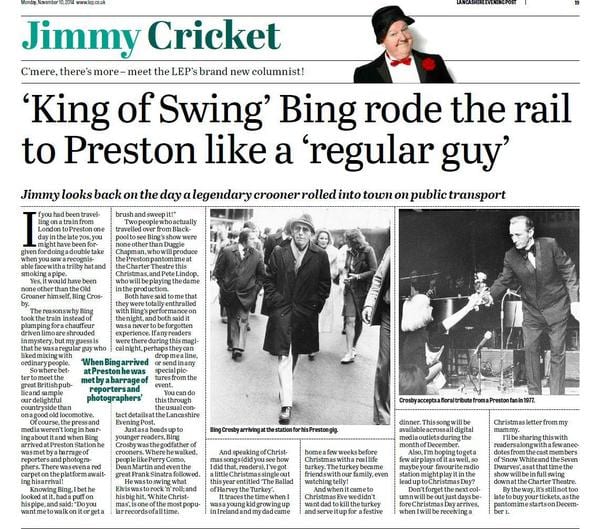 One hundred events to celebrate 100 years