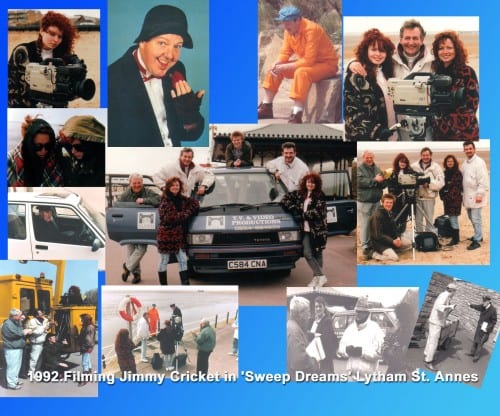 A picture montage (above) based on a silent comedy film in which Jimmy Cricket starred has been sent to the famous Northern Irish entertainer more than two decades after it was made.

The sender was the Reverend Lawrie Adams who worked with Jimmy on a film project in the early 1990s.

At the time, Rev Adams was based at a church in the pretty town of Whalley in East Lancashire and he was in charge of  BDTV – Blackburn Diocese Television.

Now a retired vicar living in Cheadle, Cheshire, Rev Adams recently went to see one of Jimmy’s shows at the Plaza Theatre in Stockport.

The project  they worked on was called Sweep Dreams, a short, silent, comedy piece featuring Jimmy as a street sweeper in and around the Lancashire coastal resort of Lytham St Annes.

Rev Adams directed the piece and his two daughters – Fiona and Tracey – were also part of the production team.

The week’s filming in 1992 was completed on location in and around the notable landmarks of the resort ie the beach, promenade and bandstand, and, as you would expect, the theme of the film was Jimmy getting into all sorts of scrapes and mischief!

Although the project was never broadcast on television – interesting because this film pre-dated Mr Bean which became a success in the same silent comedy genre a few years later – much fun was had by all who were involved.

Jimmy said he enjoyed his time on location, adding: “It was really nice that 20 years later I was able to hear again from the Rev Lawrie and to receive the montage which brought back many fond memories.”

Wall of fame features Jimmy & others