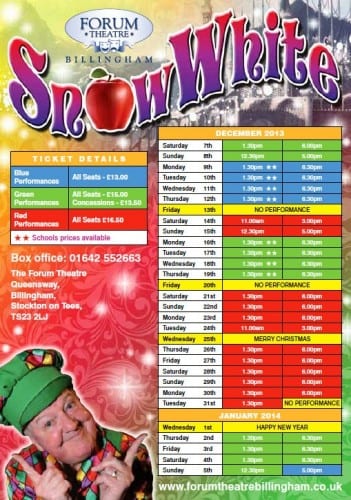 Jimmy Cricket’s latest panto has been getting some rave reviews on the social media site, Twitter.

The Northern Irish entertainer is playing  the comedy role of Muddles in that old favourite, Snow White and the Seven Dwarfs, at the Forum Theatre in Billingham near Middlesbrough.

And he and the rest of the cast, which includes Emmerdale’s Kurtis Stacey  (who plays Alex Moss in the soap and the Wicked Henchman in Snow White), have been praised for their performances in the pantomime which started on Saturday.

Here are a selection of the tweets:

Sam Scullion ‏@samshort1984: Just been to snow white and the seven dwarfs…wow it was brilliant and hilarious @jimmy__cricket @kurtisstaceyKS and the rest of the cast!!

Sam Scullion ‏@samshort1984: @jimmy__cricket just left the panto would just like to say thank-you for a brilliant and hilarious panto :-)

David wallis ‏@Davie_Wally: Just got in from watchin Snow White at the forum! Me n the kids never stopped laughing.Well done to @jimmy__cricket and the rest of the cast

Get all the latest news and reaction about Jimmy by following him on Twitter.

The panto, which runs until  5 January, is being produced by the hugely experience Duggie Chapman, who has been in charge of the Forum Theatre’s panto for the last 15 or so years.