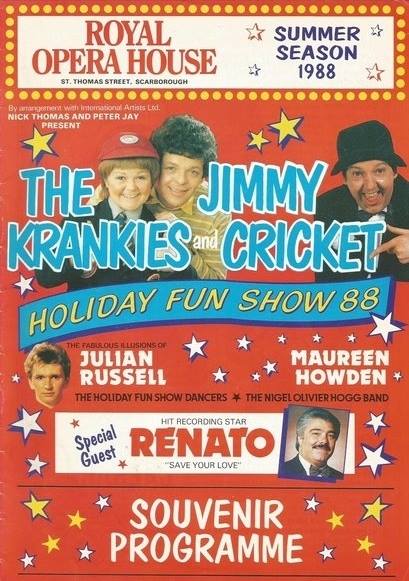 Jimmy Cricket was taken back 26 years recently courtesy of a picture posted on Facebook.

Paul Burton published a flier (right) on the summer season of 1988 when famous entertainer Jimmy performed at the Royal Opera House in Scarborough.

The show also featured Scottish comedy duo The Krankies and the singer Renato (who sang the hit song Save Your Love with Renee).

Jimmy said: “I fondly remember the season and the huge success the show had; for several weeks over that summer, it played to packed houses over two performances a night for six days a week.

“It was so successful the producer Nick Thomas – who went on to found the Qdos Entertainment empire – extended the show’s season to accommodate the demand!

“The sad side to this story is the fact that the Opera House was a beautiful, traditional, Victorian auditorium located near to the centre of Scarborough town centre.

“Unfortunately it was deemed surplus to requirements a few years after my season and was demolished as a result.

“It has now been adopted as a case study when older traditional auditoriums are placed at risk within their town and communities.”