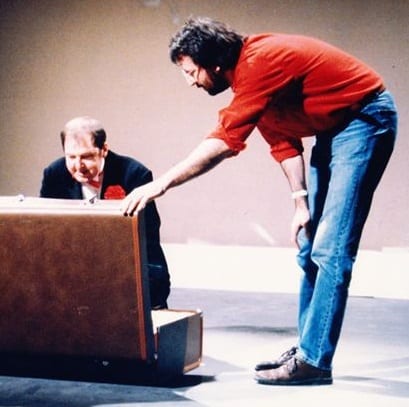 Jimmy Cricket was reminded of an old television colleague via this photograph posted on Facebook, the social media website.

It was taken during filming for comedian Jimmy’s TV series called And There’s More that was broadcast on ITV during the mid-1980s.

In the photo with the famous entertainer is William McLean Kerr, who was the designer of the title sequence for the first series. It was he who sent Jimmy this photo through Facebook.

William stopped working in television not long after the picture was taken. He decided to go and paint for a living, and now has a studio in Troon, Scotland. William paints oil paintings, landscapes, seascapes, fine art prints and drawings.

Jimmy said: “I was thrilled William got in contact after all these years and the photo was certainly a nice piece of nostalgia for me.”

A retired fireman and The Original Wag