Jimmy Cricket will again team up with Northern Ireland’s favourite showband when he returns to the land of his birth this spring.

The Belfast-born entertainer is appearing alongside Clubsound on a tour which is spread over two legs. The first leg is scheduled for between 28 February and 2 March and the second from 18 to 20 April.

The six venues are spread throughout the province and the tour is being promoted by Northern Ireland’s leading entertainment promotions Company, David Hull Promotions.

Rochdale-based Jimmy said: “I am very excited about returning home to Northern Ireland for this tour – it has been a few years since I last visited some of these venues.” 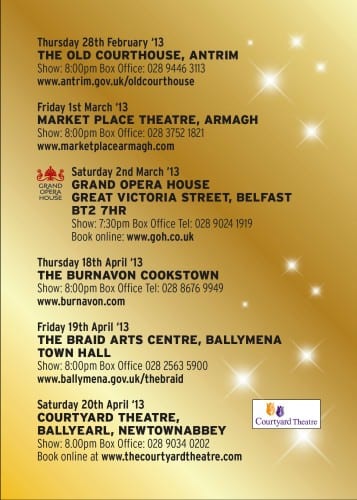 His last visit to Northern Ireland was hailed a huge success, when he opened Belfast’s new comedy festival Belly Laughs at the Black Box venue in the city last September.

He added: “I am thrilled to be sharing the stage with Clubsound as I have worked with them in the past and think they are a talented musical outfit.

“I am especially delighted to be renewing a friendship with the lead vocalist of Clubsound, George Jones, who has also been a local radio presenter for a number of years.

“And I am also pleased to be teaming up with David Hull again, whom I first worked with over 25 years ago when he first got launched on national television.”

With a little help from my friends…