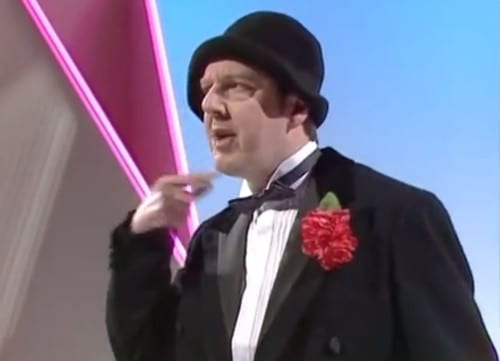 Fans of famous entertainer Jimmy Cricket are in for a real treat – an airing of the first episode of his TV series from the 1980s.

And There’s More was filmed for Central Television at their studios in Lenton Lane, Nottingham – sadly no longer there – and transmitted in June 1986.

Now, nearly 30 years later, the programme is being broadcast on Jimmy’s YouTube channel and also on the homepage of this website.

But you will have to be quick as the video will be taken down tomorrow at 5pm (Friday).

Jimmy said: “It showed what great comedy actors and impressionists Rory Bremner and Jessica Martin were; what a good stand-up comedian my friend Adrian Walsh was; and what a good sport Chinese actor Hi Ching was. The show’s special guest was actress and winger-songwriter Hazel O’Connor.”

The series was produced and directed by Tony Wolf and the associate producer was Paula Burden – whose father was the famous music hall comedian Albert Burden.

* Because of technological problems, we were unable to upload the video as hoped yesterday. Sorry for any inconvenience.

Will the ‘real Jimmy Cricket’ please do stand-up!