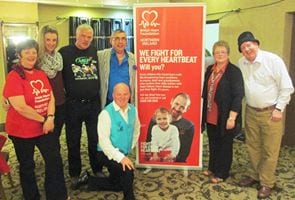 The principal organiser of a charity show headlined by Jimmy Cricket could not watch the production after falling ill just days before it took place.

Jimmy Walker had booked the entertainer to be the lead act in the fund-raising event on 12 September at the Lodge Hotel, Coleraine in Northern Ireland.

The charity concert was in aid of the British Heart Foundation Northern Ireland (BHFNI).

But organiser Jimmy, who lives in nearby Ballymoney, was taken ill the weekend before the show, but as the concert venue was only around the corner from the hospital, his famous namesake was able to pop over to see him personally.

Alongside Belfast-born and Rochdale-based comedian Jimmy in the production was Ulster country singer Curtis Magee and the performer Gary Wilson.

Gary was doubling up for this event as he is also the British Heart Foundation Northern Ireland’s fund-raising volunteer manager!

Top: Jimmy Cricket with fellow artists and some staff and volunteers from the British Heart Foundation Northern Ireland. Stood next to Jimmy is Jimmy Walker’s wife, Helen, who was also instrumental in organising the show.

Below, Jimmy is pictured with Curtis and below right, with Gary.