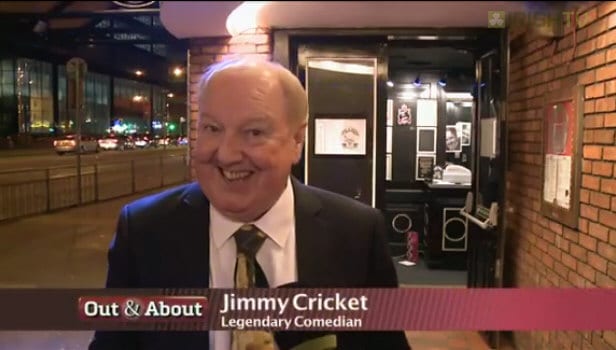 The television station is viewed in over 140 countries across the world and is Ireland’s first international TV channel.

Its aim is to broadcast local stories to a global audience and it has a programme called Out and About in Manchester, which is broadcast weekly and is presented by correspondent Martin Logan.

Martin attended famous entertainer Jimmy’s 70th birthday celebrations at the popular Frog and Bucket comedy venue in Manchester last month, along with his cameraman, Sam, and spent a fair amount of time capturing the atmosphere at the event.

They grabbed an interview with the birthday boy himself and also got a word with Jimmy’s oldest daughter, Jamie, who had travelled up from her base in London to be there.

Irish TV can be viewed in the UK on the Sky platform channel 191, Freesat 400, and online at www.irishtv.ie and www.irishtv.com.