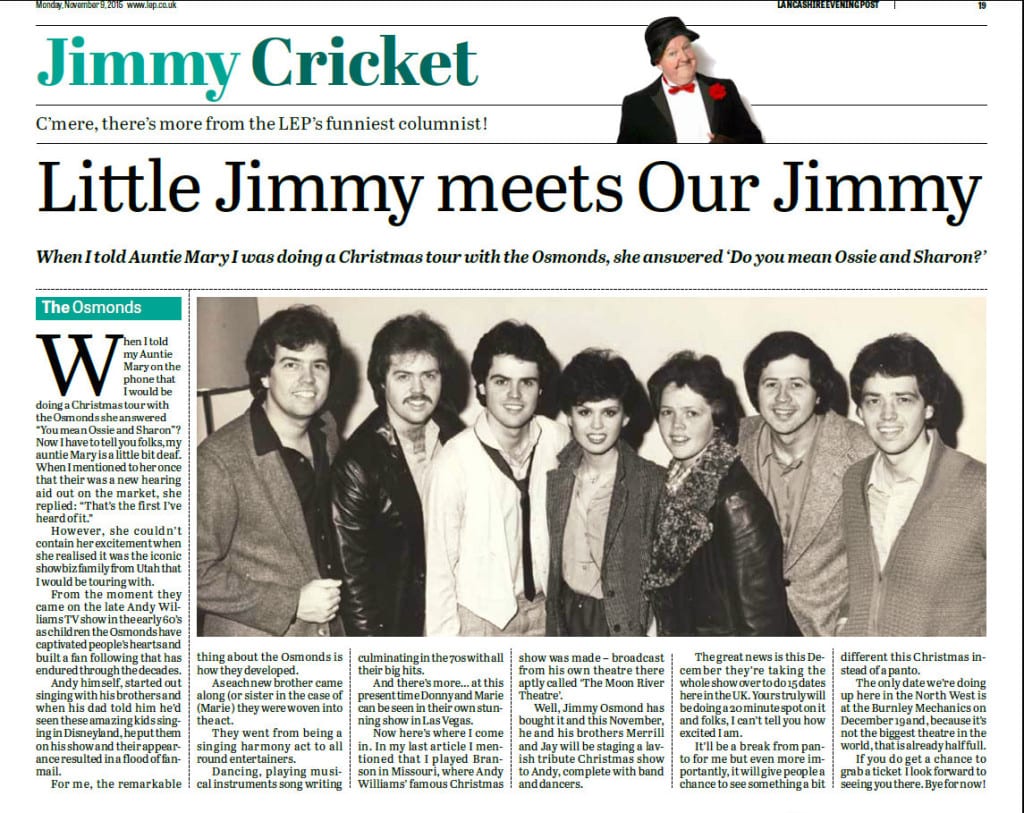 Jimmy Cricket has spoken of his excitement as he prepares to appear with the world-famous Osmonds in a UK-wide tour in the run-up to Christmas.

The well-known Northern Irish entertainer is teaming up with three of the Osmond brothers for a series of seasonal shows, called the Andy Williams Christmas Spectacular, starting on Tuesday 8 December.

The Osmonds are an American family music group with a long and varied history as star performers. They started their musical careers as children and achieved further success as teen-music idols, going on to produce a hit television show and also perform as solo and group artists. 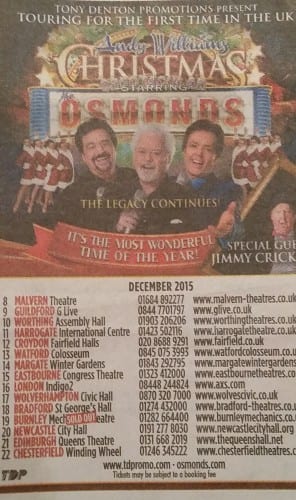 They first comprised brothers Alan, Wayne, Merrill and Jay Osmond and were later joined by younger siblings Donny – the most famous of them – and Jimmy. Their only sister Marie, who rarely sang with her brothers at that time, launched a successful solo career in 1973.

Jimmy’s recording of Long Haired Lover from Liverpool in 1972 resulted in The Guinness Book of World Records designating him the youngest performer to have a number one single on the UK Singles Chart. The song was credited to ‘Little Jimmy Osmond’.

Veteran comedian Jimmy will be a guest show on the Christmas shows, which star Jimmy, Merrill and Jay Osmond.

Speaking in his latest column for the Preston-based Lancashire Evening Post, he said: “From the moment they came on the late Andy Williams TV show in the early 1960s as children, the Osmonds have captivated people’s hearts and built a fan following that has endured through the decades.

“In my last article, I mentioned that I played Branson in Missouri – where Andy Williams’ famous Christmas show was made – broadcast from his own theatre aptly called ‘The Moon River Theatre’.

“Well, Jimmy Osmond has bought it and this November his brothers Merrill and Jay will be staging a lavish tribute Christmas show to Andy, complete with band and dancers.

“The great news is this December they’re taking the whole show over to do 15 dates here in the UK. Yours truly will be doing a 20-minute spot on it and, folks, I can’t tell you how excited I am.”

Full list of dates (note that the Burnley show is sold out):