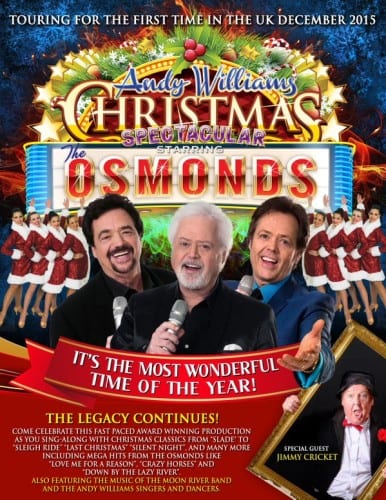 on the Osmonds’ Christmas tour in which Jimmy Cricket guest stars are now officially sold out.

The Mechanics Theatre in Burnley on Saturday 19 December was the first to put up the ‘full-house’ signs and now there are no more seats available for Tuesday’s tour opener in Malvern or for the show’s appearance in Edinburgh four days before Christmas.

However, there are still tickets remaining for the 12 other dates this month for the Andy Williams Christmas Spectacular in which well-known Northern Irishman comedian Jimmy is a special guest.

Tickets are going fast for all the December shows and it is not expected to be long before more sold-out signs will appear next to the dates, which are:

Where did Jimmy Cricket turn on Christmas lights?