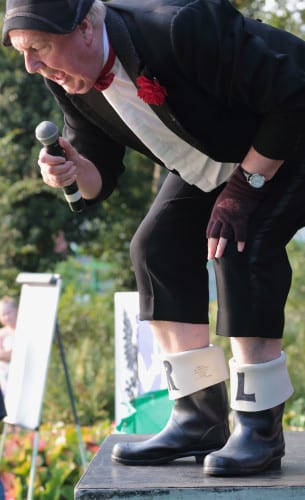 Jimmy Cricket was asked to perform TWICE at this year’s Crawley Irish Festival.

The famous Irish entertainer not only performed on the outside stage, but was also asked to appear in the theatre’s foyer that featured a programme mainly of music and was compered by good friend, Patrick O’Connell.

The festival was organised by local Crawley resident John Nolan and took place in and around the English town’s main Theatre called The Hawth.

Jimmy was asked to participate at the event by his friend Gerry Molumby, who hosted the entertainment that was presented on the outside stage at the festival.

“It was a great event and a wonderful atmosphere,” said Jimmy.

“Certainly there seemed to be a large Irish contingent who had arrived en masse from across Greater London, as well as a tremendous presence from local Crawley residents.”