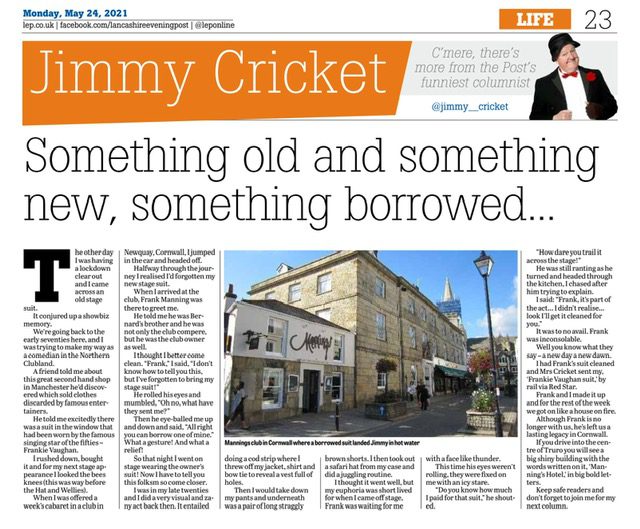 Sifting through some old photographs reminded Jimmy Cricket about the time he borrowed a suit off fellow comedian Frank Manning.

Writing in the Lancashire Post, he says: “Going through old photos during lockdown can conjure up some showbiz memories.

“It was the early eighties and I  was going through the airport in Jersey with Mrs Cricket and my three small children.

“I noticed comedian Bernard Manning in the distance. Now, knowing Bernard’s penchant for making sharp retorts to fellow entertainers and knowing also that we had to pass him, I girded my loins.

“Bernard didn’t let me down; as we approached him, he let rip in his inimitable way as  his bull-throated vocals went into full throttle.

“‘What’s this, the von Trapp family? Don’t you ever go to sleep at night… haven’t you heard of Horlicks?’

“Phew! Was I glad to make it to the other side?! To be honest, folks, I was relieved. At least he didn’t swear.

“However, this column isn’t about Bernard, but about his brother Frank. We have to go back a further 10 years for this story.

“It’s the early seventies and I was a struggling comedian trying to make my way in the Northern Clubland.

“A friend told me about this great second-hand shop in Manchester he’d discovered that sold clothes that had been discarded by famous Entertainers.

I looked the ‘bees knees’

“He told me excitedly that there was a suit in the window that had been worn by the famous singing star of the fifties, Frankie Vaughan.

“I rushed down, bought it and for my next stage appearance I looked the ‘bees knees’ (this was way before the hat and wellies).

“When I was offered a week’s cabaret in a club in Newquay, Cornwall, I jumped in the car and headed off.

“Halfway through the journey, I realised I’d forgotten my new stage suit.

“When I arrived at the club, Frank Manning was there to greet me.

“He told me he was Bernard’s brother and he was not only the club compere but he was the club owner as well.

“I thought I better come clean. ‘Frank,’ I said, “I don’t know how to tell you this, but I’ve forgotten to bring my stage suit!’

“He rolled his eyes and mumbled: ‘Oh no, what have they sent me?’

“Then he eye-balled me up and down and said: ‘Alright, you can borrow one of mine.’ What a gesture! And what a relief!

“So that night I went on stage wearing the club owner’s suit!

“Now, I have to tell you this folks, so come closer.

“I was in my late 20s and I did a very visual and zany act back then.

“It entailed doing a cod strip where I threw off my jacket, shirt and bow tie to reveal a vest full of holes.

“Then I would take down my pants and underneath was a pair of long straggly brown shorts. I then took out a safari hat from my  case and did a jungle routine.

“I thought it went well, but my euphoria was short-lived for when I came off stage, Frank was waiting for me with a face like thunder.

“This time his eyes weren’t rolling; they were fixed on me with an icy stare.

“‘Do you know how much I paid for that suit?’ he shouted. ‘How dare you trail it across the stage!’

“He was still ranting as he turned and headed through the kitchen. I chased after him trying to explain: ‘Frank, it’s part of the act… I didn’t realise … look, I’ll get it cleaned for you.’

“It was to no avail – Frank was inconsolable.

“I had Frank’s suit cleaned and Mrs Cricket sent my Frankie Vaughan suit by rail via Red Star.

“Frank and I made it up and for the rest of the week we got on like a house on fire.

“Although Frank is no longer with us, he’s left us a lasting legacy in Cornwall.

“If you drive into the centre of Truro you’ll see a big shiny building with the words, ‘Manning’s Hotel’ in big bold letters.

“Keep safe readers and don’t forget to join me for my next column.”