Walkabout with the Lamplighters

Walkabout with the Lamplighters 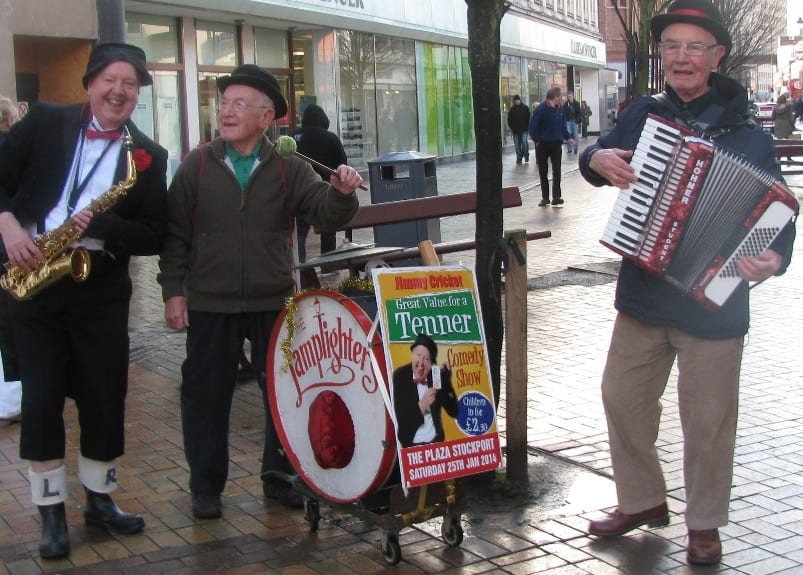 Jimmy Cricket teamed up with a musician he has known for more than  40 years when he promoted a show in Stockport earlier this year.

The famous entertainer thought a walkabout would be a good way of publicising his forthcoming visit to Stockport’s Plaza Theatre at the end of January.

Armed with his much-loved saxophone, he decided he would join his friends, the busking outfit called the Lamplighters, and walk from the pub called The Swan With Two Necks in central Stockport.

They went along Mersey Square in front of the main entrance to the Merseyway Shopping Centre, and then on to the theatre itself.

The Lamplighters are in fact the Walker brothers – Cyril (on the accordion) and Ivor, commonly known as Mack (on the drum).
Jimmy has known Cyril for a very long time – it was he who helped the Northern Irish comedian to get established on the North of England club circuit when he first set out on the road to showbusiness back in the early 1970s.
At that time Cyril was part of a double act called Clayton and Walker who were already touring around the entertainment venues in the North.
Jimmy said: “The parade through Stockport was a nice bit of fun. It also certainly made an impact, as when I returned to the Plaza I had a very healthy crowd in attendance who all had a great time watching my stand-up show!”