A St Patrick’s Day event featuring famous entertainer Jimmy Cricket was so successful that he was immediately booked again for next year!

The Northern Irish comedian appeared at a specially arranged lunch for St Pat’s Day 2014, which was held at the iconic Adelphi Hotel in Liverpool.

Jimmy is pictured with Clare Bowles in the photograph below left and, right, both of them are joined by Marianne Kavanagh. The photos were posted by Clare on Facebook. 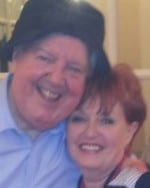 The event was organised by the Adelphi Hotel and because it went down so well, within 24 hours it was decided to have the same again for the 2015 St Patrick’s celebrations.

And for next year’s show they did not hesitate to rebook Jimmy as they had received so much interest from people for a repeat performance.

The Edwardian-style Adelphi hotel is internationally renowned and was the focus of the  fly-on-the-wall TV documentary series Hotel.