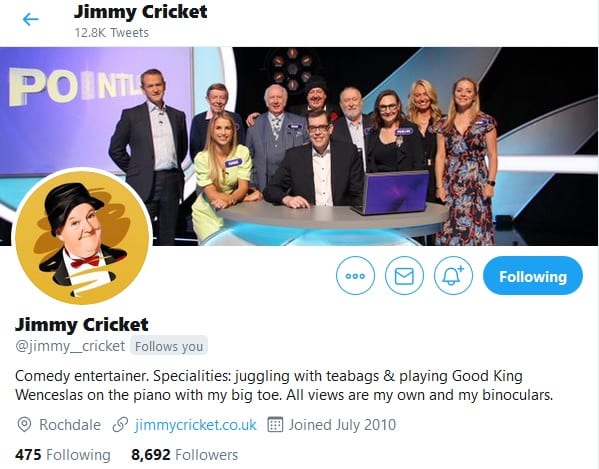 Jimmy Cricket has changed his Twitter profile picture with a drawn portrait of him.

A friend, whose account is Steve Ace Luff on Facebook, sent what he describes as “pop art” to the famous comedian.

Jimmy expressed his gratitude for the drawing.

He said: “Wow Steve it is very life like! Thank you for this, it is very much appreciated! Stay safe my friend!”

Steve told Jimmy:  “We’ve met a few times Jimmy. You remember it too, Blackpool storm, and you were on stage on the pier.

“Waves were crashing, freezing cold and you were on stage in a nappy performing a comedy sketch
“You were a true professional carried on until the end even though some rain.

“I loved that show it was special due to you carrying on against literally everything being thrown at the theatre.

“Years later, we met again in Worthing and I reminded you in the break – you re-told the experience to the audience.”
The illustration has been well received on social media.
Gerry Molumby commented: “So you Jimmy with a tinge of Laurel and Hardy combined!”
Another poster said it “looked great”, while one called Jimmy a “national treasure”.

Stan Laurel and Oliver Hardy are arguably the most famous of all double comedy acts.

They performed during the early Classical Hollywood era of American cinema.

The pair became well known during the late 1920s to the mid-1940s for their slapstick comedy.

Laurel played the clumsy friend of the pompous Hardy.