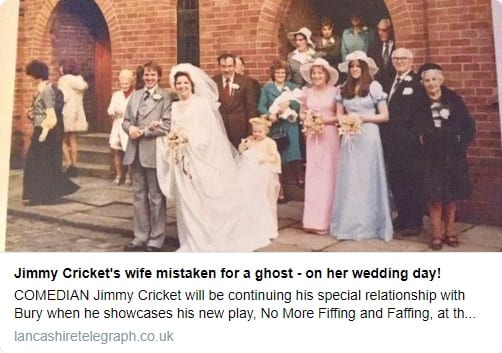 Jimmy Cricket and his new play have been the focus of an article in the Lancashire Telegraph.

No more Fiffing and Faffing had a successful debut last September at the Blackburn Empire Theatre in Lancashire.

It will now be performed at The Met in Bury (23 February), Chorley Theatre (19 May), Bridlington Spa (18 July) and Gladstone Theatre on The Wirral as part of a tour across the North of England.

All-round entertainer Jimmy performs in the play, along with Jonathan Young from The Bachelors, and actor Colin Meredith, who has made several notable appearances in ITV’s Coronation Street over the years.

The Lancashire Telegraph previewed the play in Bury and highlighted Jimmy and Mrs Cricket’s strong connections to the town.

The article begins: “Comedian Jimmy Cricket will be continuing his special relationship with Bury when he showcases his new play, No More Fiffing and Faffing, at the Met later this month.

Set at the end of the pier, it’s the tale of a comedy double act who prepare for their final performance after many years on the road together.

As the final show looms, long-held resentments come to the fore.

Jimmy was inspired to write the show, in which he also stars, after seeing the success of fellow comedian Bobby Ball’s first steps into writing for the stage.

‘The show is part drama and part variety,’ he said. ‘We see the duo doing their act on stage but also see what’s happening off stage in the dressing room. It’s nice being able to strike that balance so for an audience there are some classic comedy routines to enjoy but also the relationship between the two comedians.’

No more Fiffing and Faffing was premiered at the Empire Theatre, Blackburn, last year and Jimmy is delighted to be bringing it to Bury.

‘Mrs Cricket and I have a strong connection to Bury,’ he said revealing that he and his wife May had their first home in the town on Wash Street less than a mile from the Met.

The couple were married in Bury in 1974 having met at Pontins when Jimmy was a Bluecoat and May was a waitress in the restaurant.”

Visit here for the full story

Oxton show: ‘Lovely to be back doing the job I love’