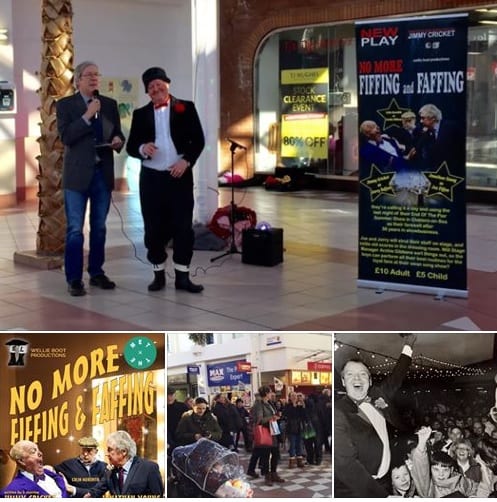 Famous comedian Jimmy Cricket has been promoting the first leg of his touring play at a shopping centre in Greater Manchester.

No more Fiffing and Faffing, which got a great reception from the audience on its debut last September at the Blackburn Empire Theatre in Lancashire, will now be performed at The Met in Bury (23 February), Chorley Theatre (19 May), Bridlington Spa (18 July) and Gladstone Theatre on The Wirral.

Jimmy, who wrote the play, was at the Mill Gate Shopping Centre in Bury at the weekend to  let the people of the town know all about the Wellie Boots production.

He later posted the above photos on social media and said: “Out and about today catching the shoppers as they pass by, advertising our brand new Comedy Play soon to be staged at #themet in Bury, my thanks to Marie Gribben, Manager at #MillGateBury, on behalf of myself and #JonathanYoung and #ColinMeredith, the last time I was there it was to turn the Christmas ? lights on, which was back in the nineties! ?”

All-round entertainer Jimmy performs in the play, along with Jonathan Young from The Bachelors, and actor Colin Meredith, who has made several notable appearances in ITV’s Coronation Street over the years.