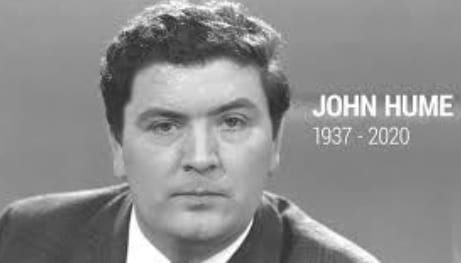 Jimmy Cricket described an article written by Lord David Alton about the late John Hume as a “wonderful tribute”.

He was a key architect of the Belfast Agreement,

It was also known as the Good Friday Agreement, because it was reached on Good Friday, 10 April 1998.

The talks addressed issues which had caused conflict during previous decades.

They resulted in an agreement between the British and Irish governments on how Northern Ireland should be governed.

It aimed to establish a new, devolved government for Northern Ireland.

Because of Covid-19 restrictions, limited numbers attended the funeral Mass in St Eugene’s Cathedral in Derry.

Jimmy said: “What a wonderful tribute to Politician and Nobel Peace Prize winner John Hume, who brought peace and stability to N. Ireland.

“This article is by Lord David Alton who himself works tirelessly for peace and justice throughout the world.”

Lord Alton, an MP for 18 years, used his own website to pay tribute.

He said: “He attracted many of us into political life, knowing that we had to find political solutions and answers to deep seated injustices.

“And that cycles of revenge killings were not the answer.

“We will not quickly forget the role he played in providing a counterpoint to paramilitary violence, in opposing narrow-minded bigotry and sectarianism…

“… In championing cross-community reconciliation and devolved government, and in giving politicians a good name.”

Lord Alton began his career as a teacher.

In 1972, while still a student, he became Britain’s youngest city councillor, in Liverpool.

Seven years later, he became the youngest member of the House of Commons and was later appointed a life peer.

His motto on his Coat of Arms is taken from the Book of Deuteronomy: Choose Life.

Watch the funeral for John Hume.