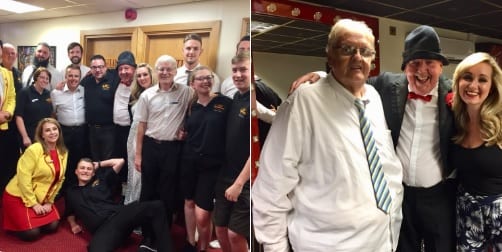 Jimmy Cricket returned to the Club Tropicana in Skegness – and described it as a “great night”.

The famous Northern Irish entertainer, billed by the club’s website in the build-up to his performance as “top comedian” and “star of TV”, appeared at the Lincolnshire venue on Saturday (28 July).

He had also done a show last September at the 2,000-seater club, which hosts a variety of acts including live bands, singers, dancers and comedians.

Jimmy posted on Twitter the photos above and the following message: “Great night at the, “New Tropicana”, Skegness with Ents Manager Chris Merry, Singer and Compère Helen Louise Farrell with Adam and Ben on sound and lighting, alongside the Ents team, and my friend Anthony popped in for a visit