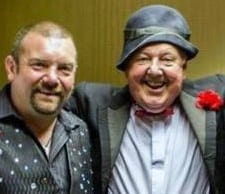 Jimmy Cricket was reminded of a charity show held in Carlisle more than two years ago by a photograph posted recently on Facebook.

The famous Northern Irish comedian is pictured with Mick Locke at the concert, which was called LW Rock4Macmillan and took place at the Shepherd’s Inn.

Jimmy headlined the 2012 edition of the event which is an annual fundraiser organised by Carlisle-based Kelvin Wood, with all proceeds donated to the Macmillan Cancer Support charity.