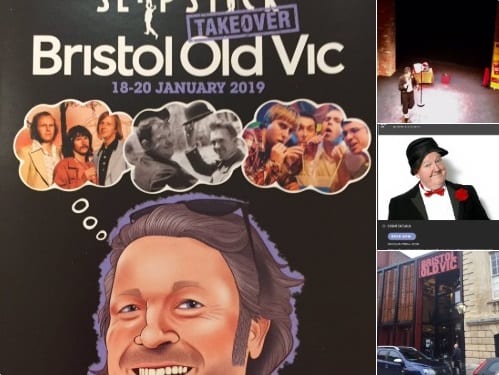 Jimmy Cricket was told that he “went down a storm” in the 15th Slapstick Festival in Bristol at the weekend.

The famous comedian performed on Sunday (20 January) in The Weston Studio at the Bristol Old Vic.

Since 2005, the festival has hosted more than 300 events for over 100,000 people, introducing rare archive and silent comedy films, and combining them with live music from world-class musicians, well-known guests and film experts.

The organisers said on social media after the event: “Thanks for coming Jimmy – cracking show, went down a storm.”

Jimmy posted: “Enjoyed performing @SlapstickFest in the, “Weston Studio”, at the Old Vic here in the great city of Bristol.”

He later said: “For the past 15 years, the Slapstick festival has been celebrating Charlie, Buster, Stan and Ollie and all the great visual comedy pioneers of the past. It was an honour and a pleasure to perform my one-man show for them last Sunday at the Bristol Old Vic.”

A member of the audience, Jonathan Sloman, who is a freelance film and TV editor and historian, tweeted: “Wanted to see Jimmy Cricket live for practically my lifetime. A real treat to be at this. Was hypnotised by those boots!”

Other performers at the 33 events over six days included Bill Oddie, Graeme Garden, Tim Brooke-Taylor, Barry Cryer, Little & Large, Sally Phillips and Dad’s Army’s Frank Williams, who is among those pictured below with Jimmy and his wife May.

Jimmy posted on social media: “Lovely meeting up with old friends Producer and Author @ChrisGidney and Katherine his wife, alongside Ronnie, and actor Frank Williams, (Rev Farthing in Dad’s Army), after the @SlapstickFest in @BristolDoyle Hotel last night.”