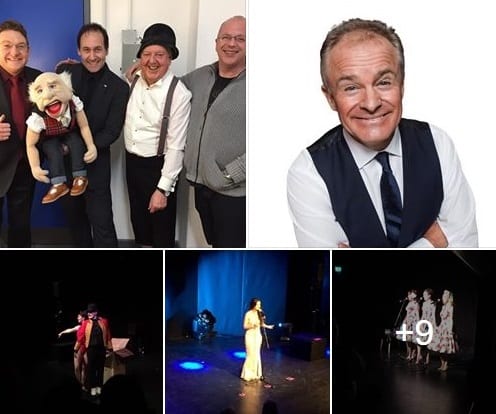 A variety show which took place at the weekend in aid of charity fully lived up to its name, according to Jimmy Cricket.

The Northern Irish comedian was among a host of entertainers performing in the Sunday Variety Show double bill at Leicester Haymarket Theatre on 27 January.

Impressionist and comedian Bobby Davro hosted the event, which was staged by Paul Burton Productions to raise funds for LOROS Hospice.

The hospice looks after more than 2,500 people across Leicester, Leicestershire and Rutland very year, providing free, high-quality, compassionate care and support to terminally ill adult patients, their family and carers.

Jimmy posted afterwards on social media: “Not since “The Happy Holiday Show”, back in 1981 at the “Wellington Pier”, Great Yarmouth, for the great Impresario Richard (Dick) Condon, who was Manager of the “Theatre Royal”, Norwich and the instigator of the “Seaside Special” at Cromer Pier, have I appeared in such a true to its title, “Variety Show”, with a total of eight acts over two hours of Comedy, Speciality, Music, with #BobbyDravo, #SteveHewett, #AndyEastwood, #SteveRawlings, #ZookaandSuzieQ, #FarylSmith and the Satin Dolls. Well done to #PaulBurtonProds for bringing this great Variety Show together for #LOROSHOSPICE. ?”