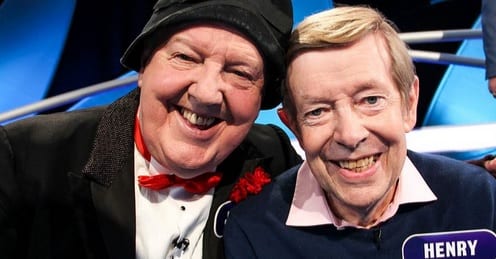 Jimmy Cricket and his team partner Henry Kelly just missed out on reaching the final two of a BBC TV quiz show.

The pair were among four teams on BBC One’s Ireland-theme edition of Pointless on Saturday (14 March).

The programme went out on BBC One at 6.05pm.

Radio and television broadcaster Henry (pictured above with Jimmy), presented Going for Gold from 1987 to 1996.

There was a jackpot of £2,500 which would go to two charities chosen by the finalists – but only if they guessed a pointless answer.

Jimmy, who came up with a particularly good answer of ‘Hale’, and Henry did well in the first round.

And they just missed out on getting any further by only a few points in round two.

Author and actor Pauline McLynn and model and media personality Vogue Williams were the eventual winners.

They beat folk music duo Foster and Allen who finished off the show with a rendition of ‘Maggie’.

Pointless is a quiz in which contestants try to score as few points as possible.

To do this, they must come up with the correct but obscure answers to general knowledge questions.

All the questions asked were previously to a panel of 100 individuals in a pre-conducted public survey.

Alexander Armstrong hosts the show with help from Richard Osman.

The programme first aired in 2009 and has had 22 regular series, plus 11 celebrity ones.

Belfast-born Jimmy, who now lives in Rochdale, Greater Manchester, said before the show he really enjoyed the experience.

“Well folks, what a fun show to be part of,” he said, though he clearly could not reveal the result beforehand.