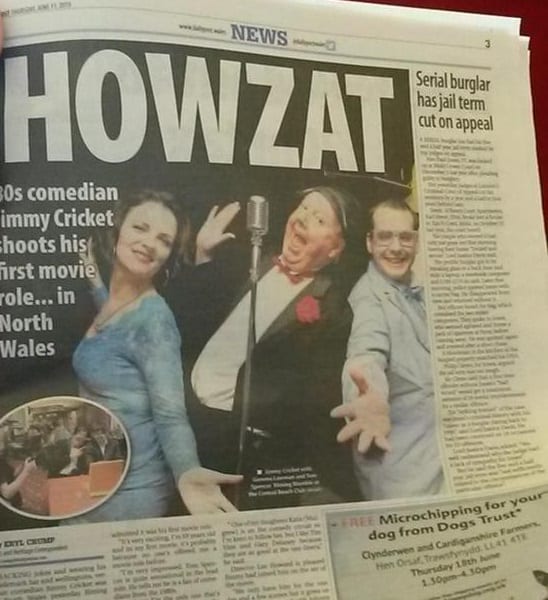 Jimmy Cricket’s recent visit to North Wales, to participate in filming a scene for Womble the movie, generated some media coverage.

There were articles in the North Wales Daily Post and in the Rhyl Journal about the entertainer’s role in the film.

Famous comedian Jimmy, 69, decided to don the Womble T-shirt he had been presented with during his filming the day before and he wished the cast and company all the very best of luck with a special message on Twitter (below right). 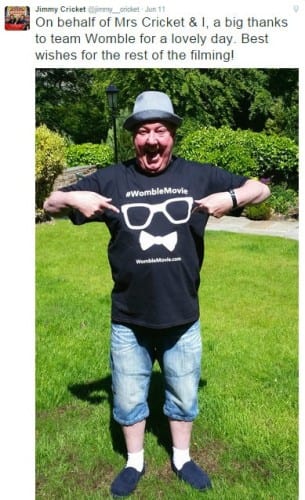 His scene was shot on location at the Central Beach Club in Prestatyn. The filming took most of a day to complete and was under the direction of Lee Howard of Best Picture Films.

Jimmy is playing himself as a talent contest judge in the movie, which will also feature the comedy actor Johnny Vegas in a cameo role – his scene will be shot later in the summer.

It is about a man called Aloysius Rupert Womble (played by actor and comedian Tom Spencer), who is in his 30s and living with Asperger’s Syndrome in a typical seaside resort town.

Aloysius’s dream is to become a stand-up comedian. The film is a week-long snapshot of his life as he goes through the trials of living with a cognitive condition while dealing with the injustices forced upon him by society and parts of his community.

Over the seven-day period, he prepares for the biggest night of his life – a talent show in his local pub.