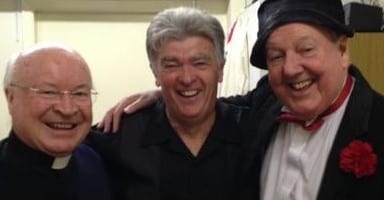 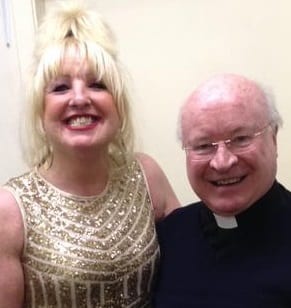 The event was held at St Peter’s & St Paul’s Parish Centre in Eccles at the end of April.

Jimmy performs each year in about eight shows across the Greater Manchester region to raise money for the hospice, which is located in South Manchester.

Each performance also features his wife May Marion singing, with Jim Nicholas completing the line-up with his Cliff’s Disco outfit.

Above, Jimmy is pictured with Jim Nicholas and Canon McBride, whose parish centre was where the show was hosted. Right, Canon McBride is with May.

Other fundraising events to come will take place at St Patrick’s Social Centre, Collyhurst in Manchester on Friday October 9 and St Mary’s Parish Centre in Denton on Wednesday October 21.