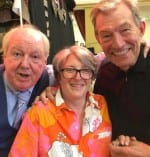 Jimmy Cricket bumped into a 60s music icon before a show in East Yorkshire.

The famous entertainer was preparing for an appearance at the Bridlington Spa Theatre over the last Bank Holiday in May when he was asked to pop into a vintage fair being hosted in the adjacent Queens Hall within the Spa entertainment complex.

Jimmy, 69, said: “I was pleased to do this because it was a great opportunity to generate a bit more interest in my show scheduled for later on in the afternoon.

“So I had an opportunity to perform on the platform at the fair and I even managed to sneak in an odd joke or two!

“And to my astonishment, 60s legend Dave Berry was at the fair! I have bumped into Dave on numerous times over the years and was delighted to see him in Bridlington. He had rented a stall at the fair to sell his line of guitars, which was a shrewd move as the fair attracted some 4,000 people.”

Dave (pictured above right with Jimmy) is a British pop singer and teen idol of the 1960s. His best-remembered songs are Memphis, Tennessee (1963), The Crying Game from 1964 and his 1965 hit Little Things.

Dave is still touring and often participates in national solid gold sixties shows across the UK.

Jimmy then went on to perform his comedy stand-up show in the theatre next door. For the third year running, the event attracted a great family audience.

Above left is Jimmy with a family who went to see the show in Bridlington.