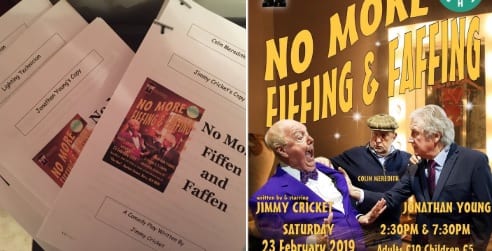 The stage is set for more performances of Jimmy Cricket’s first play.

No more Fiffing and Faffing got a great reception from the audience on its debut last September at the Blackburn Empire Theatre in Lancashire.

Appearing with funnyman Jimmy is Jonathan Young from The Bachelors, and actor Colin Meredith, who has had several notable appearances in ITV’s Coronation Street over the years.

The play will be performed at The Met in Bury (23 February), Chorley Theatre (19 May), the Bridlington Spa (18 July) and the Gladstone Theatre on The Wirral.

Jimmy, 73, posted on social media: “Well getting excited as the scripts are ready for the revisit to the play which will be staged at the #BuryMet on the 23rd February 2019, after its premiere last Sept 2018 at the #BlackburnEmpireTheatre why not come and join us for an afternoon or evening full of Variety nostalgia! ?”