Tickets are selling fast for the latest edition of the Stars come out for Francis House show scheduled for later this year at the Oldham Coliseum. 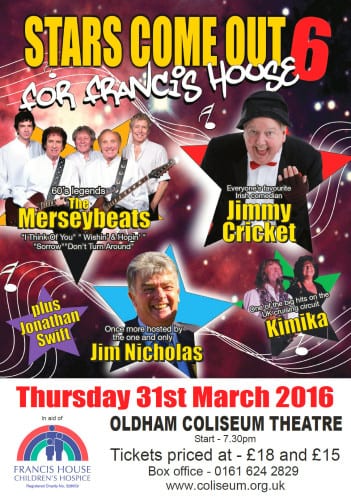 This is the sixth occasion the fundraiser will be hosted by the theatre and all previous editions have been incredibly well attended, ensuring thousands of pounds have been raised for Manchester’s hospice devoted to children.

Over the years the show has featured performers such as the Krankies, actress Catherine Tyldesley, the late Norman Collier, the Grumbleweeds, the Ivy League and other renowned artists.

This year’s edition is scheduled for Thursday 31 March and appearing alongside legendary 60s band The Merseybeats will be the much-loved and locally based comedian Jimmy Cricket. Completing the line-up will be the duo Kimika and the singer Jonathan Swift.

Co-producer Dale Mulgrew said:  “We are thrilled the interest in this show continues to grow, ensuring most of the tickets for our next one in March have already been sold.

“A lot of this is down to those who have been to one of our previous shows and who have really had a great time and so often we get asked when the next one is.

“But we still have seats left for this year’s version and we would like to fill them. So if you are looking for a great night out while at the same time helping to raise much-needed funds for one of Manchester’s worthiest causes, grab your ticket for Stars 6 before they all go!”

David Ireland, chief executive of Francis House, said: “The Stars come out for Francis House is a great evening not to be missed. Now 70, Jimmy’s enthusiasm and support for the children and families of Francis House remains as strong as ever. We’re hoping for a full house and would like to thank everyone involved.”

Kevin Shaw, Artistic Director and Chief Executive of Oldham Coliseum Theatre, commented: “Stars Come Out is always a wonderful show and the Coliseum is proud to host it each year. It is a tribute to the organisers and the great cause that they raise money for that this sixth edition of the event has already sold so well.”