The funeral for the late comedian Eddie Large takes place on 24 April.

Eddie, best known for being part of double act Little and Large, died with coronavirus earlier this month aged 78.

His son Ryan McGinnis has created an online memorial page for people to pay tribute to him.

Ryan tweeted: “As you all know my dad, @eddie6large, passed away.

“We ask that instead flowers to the funeral could you donate to our charity, @RoyalPapworth.”

Eddie was a well-known face on TV in the 1970s and 80s and was famous for his comedy partnership with Syd Little.

The TV star, who was born Edward Hugh McGinnis, had been suffering with heart failure and contracted coronavirus in hospital.

Jimmy, 74, had said when hearing of Eddie’s death: “It is with a heavy heart I have just found out, (through his son Ryan), that his father Eddie Large has passed away.

“I worked many times with him and his partner Syd.

“They were not only a wonderful double act, but such great fun to be with off stage!

“Our thoughts and prayers goes to Patsy his wife and Ryan and his family, but also with Syd, Sheree and son Dominic xx.”

Also read: What is Syd of Little and Large fame doing now? 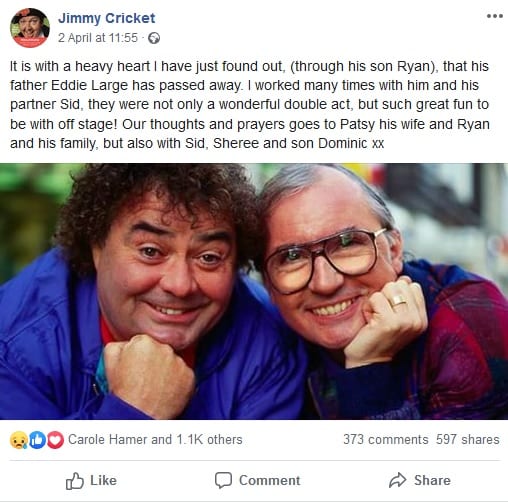