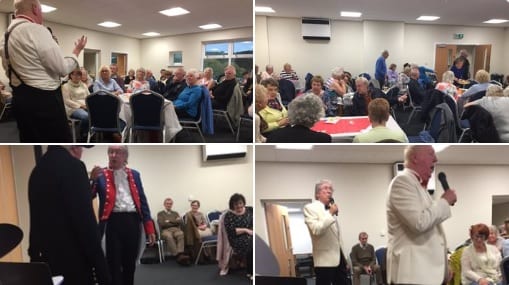 Jonathan Young from The Bachelors, a popular music group originating from Dublin, was a special guest at Jimmy Cricket’s latest ‘jam’ night.

Famous Northern Irish entertainer Jimmy and his wife May host an night of entertainment every couple of months in the lounge area of St Vincent’s RC parish centre in their adopted home town of Rochdale.

It started more than a decade ago as an opportunity for Jimmy and other performers to try out new routines and is still going strong. At every event,  there is a raffle and the selling of refreshments, with all proceeds donated to a chosen charity.

The parish centre has just been renovated and this was the first jam night to be hosted there since the work had finished.

The popular comedian has nicknamed those who regularly support these evenings as ‘Jimmy’s Jammers’.

Different guests are invited to each show and Jonathan – who is in the cast for Jimmy’s play No More Fiffing & Faffing – performed at the latest jam event.

Jonathan has worked with many groups and musicians in Ireland, notably Van Morrison, and moved to England in 1967 settling in Manchester and working as a solo act on the northern cabaret circuit with such stars as the late Ken Dodd.

He has written many songs and also acted, starting as an extra in Coronation Street and working his way up to bigger parts, including playing the leading role in The Van Boys (2000) for which he earned rave reviews at the Cannes Film Festival.

Jimmy posted on social media after the latest jam night: “Lovely Charity evening at St Vincent’s Jam night with special guest Jonathan Young, alongside Eric and Peter duetting, my thanks also to Kath on teas and coffees and Pauline and Nathan organising the raffle!

See you back at Blackpool’s Lyndene Hotel in September!