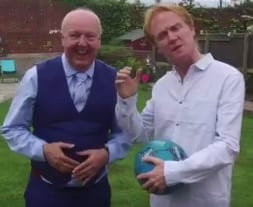 A recent nostalgic trip down Memory Lane for Jimmy Cricket was the subject of a BBC radio programme.

The famous Northern Irish entertainer returned to west Belfast, where he was born nearly 71 years ago, to tell fellow comedian and BBC Radio Ulster presenter Owen O’Neill all about his childhood.

In his radio series, Owen spends the day with a well-known local face as they show him around a place that they hold in affection, uncovering stories about their home territory.

And last month Rochdale-based Jimmy took Owen to his childhood home off the Andersonstown Road, which included playing the saxophone on the street corner where he used to perform with his mates.

They also went to the former family-run bar where much-loved funnyman Jimmy cut his teeth telling jokes to the customers.

Live show at the Club Tropicana in Skegness