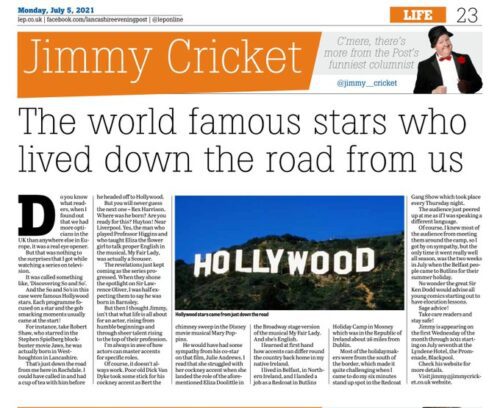 Where some Hollywood stars were born and how accents differ around the country are the themes of Jimmy Cricket’s latest newspaper column.

The famous funnyman throws up some legendary acting names such as Sir Rex Harrison and Jaws star Robert Shaw in his Lancashire Evening Post July column.

Jimmy begins: “Do you know what readers when I found out we had more opticians in the UK than anywhere else in Europe, it was a real eye-opener.

“But that was nothing to do with the surprises that I got while watching a series on television.

“It was called something like Discovering So and So.

“And the So and So’s in this case were famous Hollywood stars.

“Each programme focused on a star and the gob-smacking moment usually came at the start!

“He was actually born in Westhoughton in Lancashire. That’s just down the road from me here in Rochdale.

“I could have called in and had a cup of tea with him before he headed off to Hollywood.

“But you will never guess the next one – Sir Rex Harrison. Where was he born?

“Are you ready for this? Huyton! Near Liverpool. Yes, the man who played Professor Higgins and who taught Eliza the flower girl to talk proper English in the musical My Fair Lady was actually a Scouser!”

Read one of Jimmy’s previous columns in the LEP