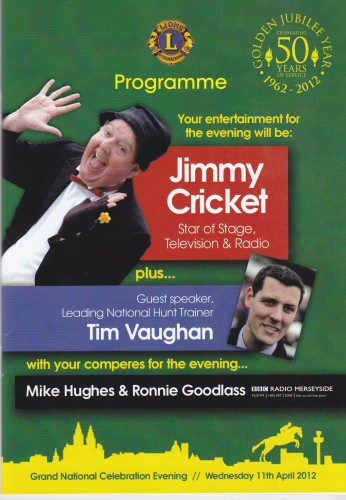 An Irish comedian and a horse racing trainer were, fittingly, the special guests at a sportsman’s dinner in Liverpool during Grand National week.

This year the dinner was staged at the Holiday Inn in Liverpool.

Jimmy says: “The organiser was Dave Scott and it was a very professionally run event which raised bundles of money for the Lions’ charitable causes they support.

“During the dinner Tim, an up-and-coming trainer on the National Hunt scene, mentioned that he was aiming for his 100th winner of the season.

“He did provide a tip to the assembled guests at the dinner. This referred to one of the horses which he trains. The tip was for the first race the next day at Newton Abbot and although the horse, Wicklewood, started as one of the favourites, unfortunately it trailed in sixth!” 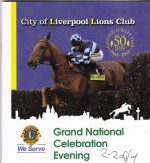 However, there was a happy ending for Vaughan whose Pant Wilkin stables are based in Aberthin, Cowbridge, South Wales – Saint Are won at Aintree’s Grand National meeting for the second year in a row to give him his 100th winner.

The City of Liverpool Lions Club, which is celebrating its Golden Jubilee during the 2011-2012 year, organise a series of fundraising projects each year which enables its members to make welcome donations to various charities and other worthwhile causes.