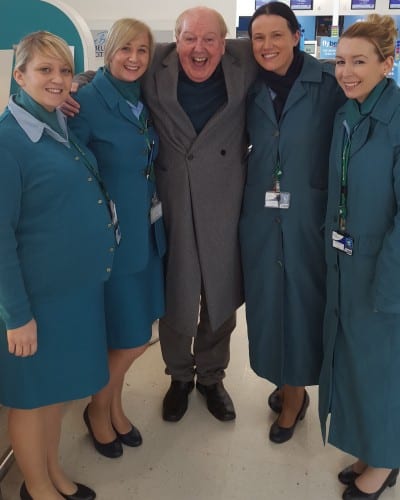 Jimmy Cricket is taking part in the 2016 edition of the You Must Be Joking tour, the first leg of which was at the Grand Opera House in Belfast.

In the comedy show, which is aimed at the audiences of Northern Ireland, Jimmy features alongside three fellow renowned Northern Irish comedians, John Linehan (AKA May McFettridge), Gene Fitzpatrick and William Caulfield (all are pictured below right).

The tour was born out of the 2014 Cookstown Comedy Festival, as the line-up was put together for the first time there with huge success. Not only did the show gel and all four comedians complemented one another really well, there was a full house too!

This merited a full tour of the province in 2015, with this year’s events continuing the interest in the show and its popularity.

After the first  2016 date in Belfast, a slight gap in the tour schedule appeared before the remaining six dates. This has allowed Jimmy to get back to continue his commitments at the Lyndene Hotel in Blackpool where he has a spring season.

When Jimmy arrived at George Best International Airport in Belfast city centre to catch his return flight to Manchester, he bumped into several Aer Lingus air stewardesses (pictured above right) – one of them had been to see the 2015 tour and her grandparents had been to see this year’s opener at the Grand Opera House.

The rest of the dates for the 2016 tour are as follows:

‘Privilege’ to be returning to Lancashire venue

Lyndene Hotel: It’s wonderful to be back!