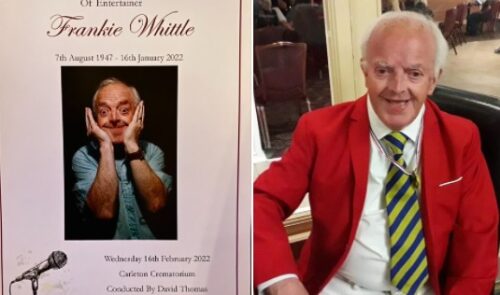 Jimmy said: “What a fabulous turnout for our dear friend and showbiz colleague, Frankie Whittle at Carleton Crematorium today.

“We started out as Redcoats at Butlins Clacton in 1968 and had remained great friends during all these years! R.I.P.”

Jimmy and Frankie were fellow Redcoats at Butlin’s holiday site in Clacton-on-Sea, Essex.

“Being a Redcoat was a great passion of Frankie’s – he would have done it 365 days of the year if he could,” added Jimmy.

“It’s special to think that we stayed very good friends for 54 years.”

Frankie enjoyed a showbiz career of more than 50 years.

Among other things, he was an actor/panto dame in addition to being singer/compere at The Music Hall Tavern in Blackpool.

Jimmy recently posted a video on social media of a sketch involving dancing binmen in memory of his late friend.

It features him, Frankie and others as binmen who perform a dance routine around the bins.

The funny clip ends with them running after the bin lorry which has driven off without them!

Watch the video by clicking here – it should begin automatically, but if not click on the arrow in the image and turn on/up the volume as necessary.

Also read from this website: Butlin’s reunion from the 1960s

Latest What About You podcast features Jimmy Cricket