The younger son of famous entertainer Jimmy Cricket is the subject of a feature in a recent edition of The Universe, the Catholic national newspaper.

Fr Frankie Mulgrew, who is based in Blackburn, East Lancashire, talks about laughter – he was a comedian like his dad before being ordained two years ago – and his faith in the article which was published on 17 July.

The Universe newspaper is one of the most read Catholic publications in the UK and so it was quite a coup for Fr Frankie to have the entire back page devoted to him. The article was headlined: Laugh – and God laughs along with you.

Fr Frankie is quoted in The Universe as saying: “My parents, both of them, are just full of joy and happiness, so from early doors we were on the road with my dad and I guess that was our life, that was our childhood.

“You’re on the road, in dressing rooms, backstage and waiting for your dad to come off and go to the next gig. 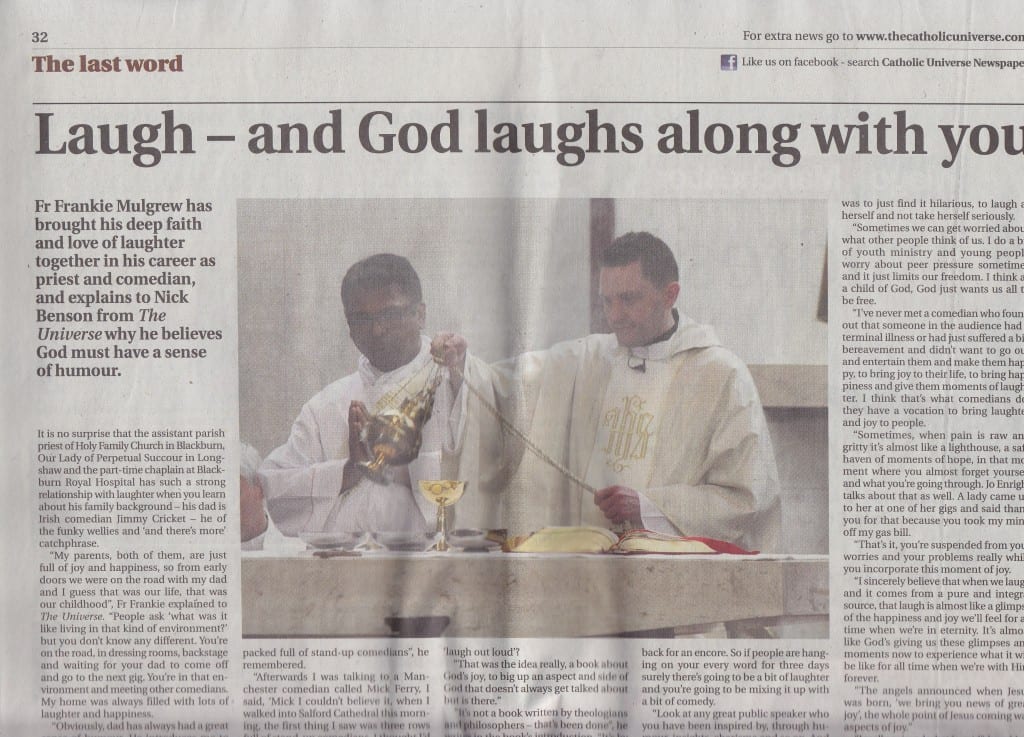 “You’re in that environment and meeting other comedians. My home was always filled with lots of laughter and happiness.”

He is currently the assistant priest at St Joseph’s RC church in Blackburn and also the part-time Roman Catholic chaplain at the Royal Blackburn Hospital.

The comic-turned-priest, whose stage name was Frankie Doodle (younger sister Katie is a stand-up comedian),  also talks in the article about a book he has had published about God and humour.

All proceeds from sales of the book go towards the charity Mary’s Meals, an organisation which supports school feeding projects in some of the world’s poorest communities where hunger and poverty prevent children from gaining an education.