Jimmy Cricket is back at the Lyndene in Blackpool this week for the first time since late spring.

The veteran comedian, whose last appearance at the popular hotel was in May, performs four times there in September.

He is on stage on three Wednesdays (4, 18 and 25 September) and Saturday 7 September. 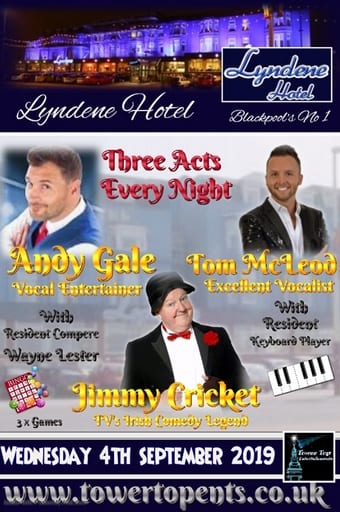 The famous entertainer will perform on three nights during December – 11, 18 and 31 – as part of the festive season.

He also appears during Halloween week (30 October) at the popular seaside resort (see right for poster).

Jimmy, who turns 74 in October, performs in two separate lounges on the same night, along with other artists.

Other acts include comedian Carl Schofield and Stars in Their Eyes winner Peter Sarsfield as Frankie Valli.

Jimmy announced earlier this year that he is to spend a FIFTH season next year at the Lyndene Hotel.

The Belfast-born comedian, who lives in his adopted hometown of Rochdale, has at least two shows almost every month in 2020.

That is apart from December next year, when he performs three times, and February when he has none.