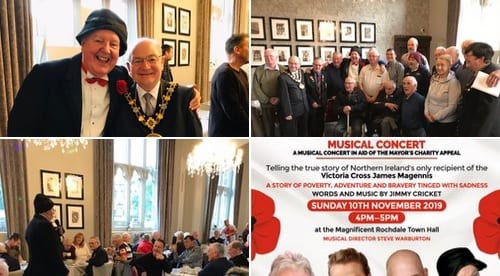 Jimmy Cricket enjoyed breakfast with the Mayor of Rochdale and veterans of the Armed Forces.
The famous comedian attended the weekly event at Rochdale Town Hall in his adopted hometown last Thursday (10 October).
He will be back there next month with his musical, Let’s hear it for the wee man.
The performance takes place at the town hall on Sunday 10 November in aid of the Mayor of Rochdale’s charity appeal.
He tweeted afterwards: “Wonderful breakfast this morning with Billy the Mayor, his Secretary Dorothy, at the, “Veterans Breakfast”, sharing the forthcoming event at the Town Hall which is on Remembrance Sunday, 10th November to raise funds for local Charities!

The musical is about Northern Ireland’s only recipient of the Victoria Cross, James Magennis.

It tells the courageous story of the submariner who grew up in abject poverty in Belfast and joined the Royal Navy aged 15.

Jimmy and the mayor met up recently (photo above right) to promote the play. Go here to watch the video.