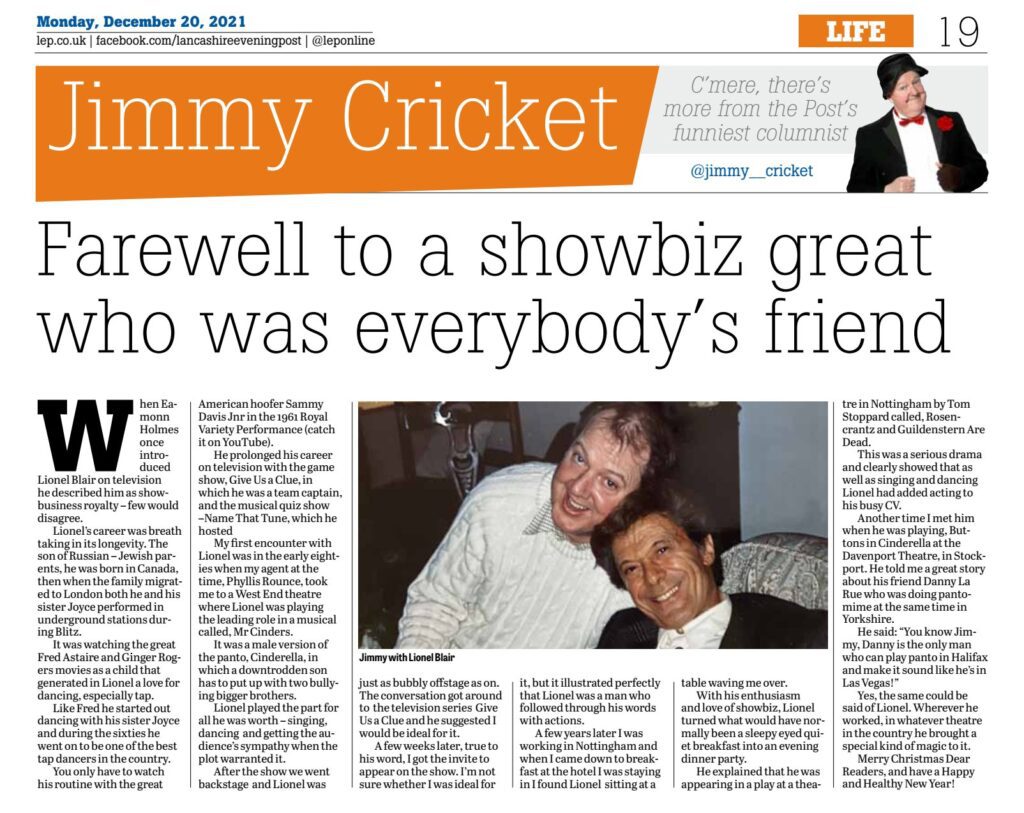 Jimmy called his piece in the Lancashire Evening Post (see above) “my tribute to one of our finest entertainers and also one of the nicest guys in showbusiness!”.

His column began: “When Eamonn Holmes once introduced Lionel Blair on television he described him as ‘showbusiness royalty’ – few would disagree.

“Lionel’s career was breathtaking in its longevity.

“The son of Russian-Jewish parents, he was born in Canada.

“Then, when the family migrated to London, both he and his sister Joyce performed in underground stations during the Blitz.

“It was watching the great Fred Astaire and Ginger Rogers movies as a child that generated in Lionel a love for dancing, especially tap.

“Like Fred he started out dancing with his sister Joyce and during the 60s he went on to be one of the best tap dancers in the country.”

Jimmy’s column also mentioned his first encounter with Lionel in the early eighties.

He said it was “when my agent at the time, Phyllis Rounce, took me to a West End theatre where Lionel was playing the leading role in a musical called Mr Cinders.

“It was a male version of the panto Cinderella, in which a downtrodden son has to put up with two bullying bigger brothers.

“Lionel played the part for all he was worth – singing, dancing and getting the audience’s sympathy when the plot warranted it.

“After the show we went backstage and Lionel was just as bubbly offstage as on.

“The conversation got around to the television series Give Us a Clue and he suggested I would be ideal for it.

“A few weeks later, true to his word, I got the invite to appear on the show.

“I’m not sure whether I was ideal for it, but it illustrated perfectly that Lionel was a man who followed through his words with actions.

“A few years later, when I was working in Nottingham and came down to breakfast at the hotel I was staying in, I found Lionel sitting at a table waving me over.

“With his enthusiasm and love of showbiz, Lionel turned what would have normally been a sleepy eyed quiet breakfast into an evening dinner party.

“Another time I met him when he was playing Buttons in Cinderella at the Davenport Theatre in Stockport.”

Jimmy’s column concluded: “Wherever he worked in whatever theatre in the country, he brought a special kind of magic to it.”

Also read on this website: Lionel Blair RIP: He lit up every room he entered

Lionel Blair RIP: He lit up every room he entered 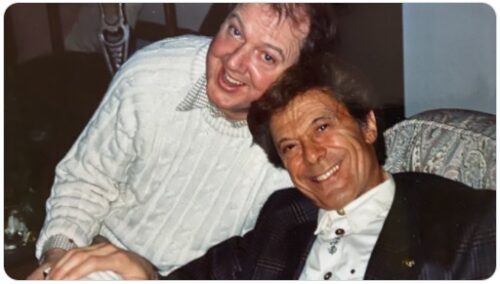 Lionel Blair had “a shining personality that lit up every room he entered”, says Jimmy Cricket.

Northern Irish comedian Jimmy has shared on social media the photo above of him with Lionel.

“Lionel had both talent and enthusiasm,” recalled Jimmy fondly.

“The world is a sadder place without him. 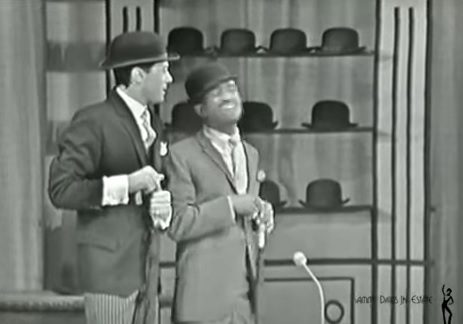 Watch here Lionel’s duet tap dance routine with Sammy Davis Jr at the Royal Variety Performance in 1961 (which he said was the highlight of his career).

Lionel was best known as a team captain on game show Give Us A Clue.

In recent years, he acted in Ricky Gervais’s Extras and also appeared on Celebrity Big Brother.

Henry Lionel Ogus, as he was known before his showbusiness career, began performing in air raid shelters during World War Two.

He grew up in north London and was evacuated to Oxford when the war broke out.

His father died when he was 13 and the following year he began working as an actor.

He performed in musical productions alongside his elder sister Joyce.

But it was his self-taught dancing skills for which he was best known.

He became a household name as team captain on ITV’s long-running Give Us A Clue opposite Una Stubbs, who died earlier this year.

Also read on this website: Tom O’Connor ‘had the gift of seeing the funny side to everything’