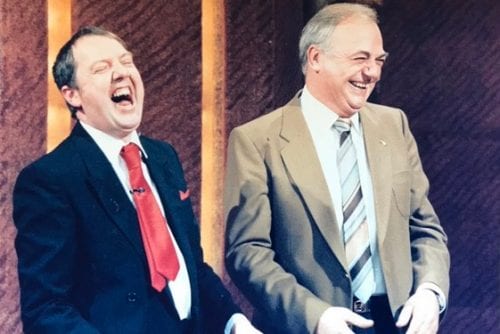 Jimmy Cricket says the late Roy Hudd OBE will be missed by everybody in the showbusiness world.

Roy, an actor, radio host, author and authority on the history of music hall entertainment, died earlier this week at the age of 83 after a short illness.

He hosted BBC Radio 2’s The News Huddlines for 26 years and also starred in Coronation Street.

Roy died on Sunday 15 March, with his wife Debbie at his side.

The all-round entertainer appeared in Corrie as Archie Shuttleworth on and off between 2002 and 2010.

Fellow funnyman Jimmy said on social media: “So sad to hear of the passing of my friend who did it all.

‘He will be so missed‘

“Comedian/actor/writer, Roy was a walking encyclopedia of the British Music Hall.

“He will be so missed by everyone in the entertainment business.

“My thoughts and prayers are with Debbie and his family at this time.”

Roy, who was born in Croydon, Surrey, earned praise for his roles in Dennis Potter’s Lipstick on your Collar and Karaoke in the 1990s.

He also starred in acclaimed crime drama Ashes to Ashes.

Five years ago, he played his first pantomime dame in Dick Whittington and His Cat at the then newly renovated Wilton’s Music Hall in London.

Other TV credits include Broadchurch, Benidorm and Casualty.