Remembrance Sunday musical – my thanks to all

Remembrance Sunday musical – my thanks to all 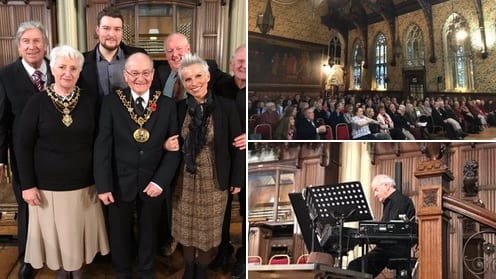 Jimmy Cricket expressed his gratitude to everybody involved following the staging of his war hero musical on Remembrance Sunday.

Let’s hear it for the wee man was performed at Rochdale Town Hall in aid of charity.
It told the story of Northern Ireland’s only recipient of the Victoria Cross, the courageous submariner James Magennis.

“Also my thanks to Billy the Mayor and his lovely wife Lynn, and his staff, Dorothy and Naz for all their support

James Magennis who joined the Royal Navy aged 15. He won the UK’s highest military honour for his bravery onboard a midget sub that attacked the Japanese cruiser Takao on 31 July 1945.

Belfast-born Jimmy wrote both the words and the music for the play.

Also read: Tribute ahead of Remembrance Sunday musical
Find out where Jimmy is performing and his other forthcoming shows by viewing all his tour dates on this website.

Variety of venues during busy run up to Christmas