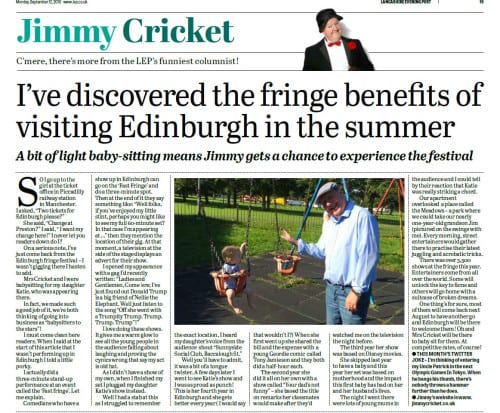 Jimmy Cricket did a spot of promoting at this year’s popular Edinburgh Festival Fringe – but not for his own show.

The famous entertainer was there primarily to support his daughter, comedienne Katie Mulgrew, and that included some baby-sitting.

Katie, below right, had her own show at this year’s festival fringe called Saboteur. 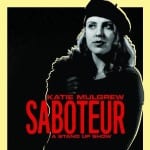 Jimmy, 70, not only popped along to see her act, but was present in Edinburgh to help look after his grandson, Jim, who is Katie’s nearly one-year-old baby.

And he ended up plugging her performance in a brief bit of his own stand-up at the Fast Fringe – as he told readers of his latest column in the Lancashire Evening Post.

“Comedians who have a show up in Edinburgh can go on the Fast Fringe and do a three-minute spot,” explained Jimmy.

“Then at the end of it, they say something like: ‘Well folks, if you’ve enjoyed my little stint, perhaps you might like to see my full 60-minute set. In that case, I’m appearing at…’ then they mention the location of their gig.

“… As I didn’t have a show of my own, when I finished my set I plugged Katie’s show instead.

“Well, I had a stab at this but as I struggled to remember the exact location, I heard my daughter’s voice from the audience shout ‘Sunnyside Social Club, Barraclough Street’.

“Well, you’ll have to admit it’s a bit of a tongue twister.

“A few days later, I went to see Katie’s show and I was as proud as punch!”

Santa CD is a ‘perfect present for Christmas’