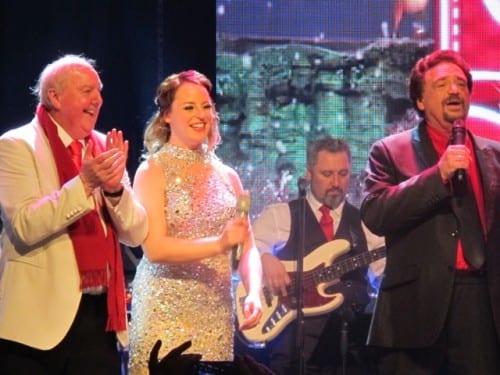 Jimmy Cricket said he had a “wonderful time” supporting the world-famous Osmonds on their pre-Christmas tour around the UK.

Well-known Northern Irish comedian Jimmy was a special guest for the Andy Williams Christmas Spectacular which ran for 15 shows, several of them sellouts.

Jimmy appeared on what was a wonderfully creative and slick show, which featured Jimmy, Jay and Merrill Osmond.

It included a video screen transmitting footage of the late American popular singer Andy Williams and images of Christmas, a set of green Christmas trees around the stage and even snow fell during the finale!

The show played to full houses in Malvern, Bradford, Burnley, Edinburgh and Chesterfield. It also visited the O2 Arena in London and everywhere it went the audiences were in great festive cheer.

Jimmy said: “The feedback was all very positive, with some reporting it was a sensational ‘feel-good’ show for Christmas.

“I would like to personally thank the Osmonds and tour promoter Tony Denton Promotions for asking me to part of this fabulous tour. I also thank everyone who came along to one of the 15 shows, as the audience really made a tremendous atmosphere at each one.”

Click on either of the arrow-shaped play buttons above to watch a slideshow of pictures from the tour. All the photos were taken during the last tour date at the Winding Wheel concert venue in Chesterfield.