Jimmy Cricket’s first play, which got a great reception from the audience on its debut performance, is touring northern England in 2019.

No more Fiffing and Faffing was staged for the first time in September this year at the Blackburn Empire Theatre.

Appearing with funnyman Jimmy was Jonathan Young from The Bachelors, and actor Colin Meredith, who has had several notable appearances in ITV’s Coronation Street over the years.

The play will now be performed at The Met in Bury (23 February), Chorley Theatre (19 May), the Bridlington Spa (18 July) and the Gladstone Theatre on The Wirral.

No more Fiffing and Faffing was reviewed in the latest edition of the Rochdale-based Style magazine (see image below).

Jimmy tweeted: “My thanks to Ruth and Colin @RochdaleStyle for the review in the recently released Style Magazine, we will be bringing the Comedy Play to @themet 23rd February, @ChorleyTheatre 19th May, @spabrid 18th July, and at the Gladstone Theatre in the #Wirral in 2019!”

The show, written by Jimmy, is an hilarious look at the end of an era of British comedy.

It is about comedy double act Joe Fiffen and Jerry Faffen on their last night in showbusiness. As well as looking as some of their classic sketches, they’ll be settling some old scores in the dressing room. 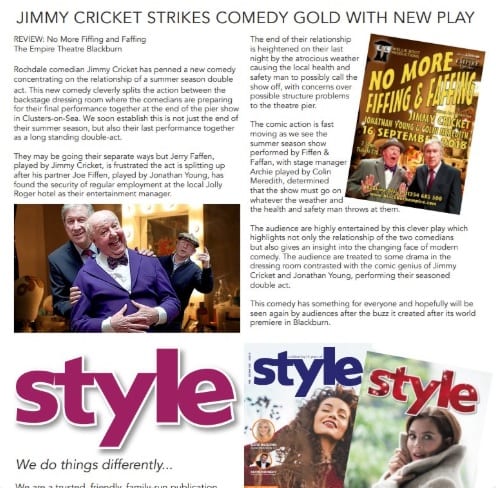 A Merry Christmas from Jimmy and Mrs Cricket!