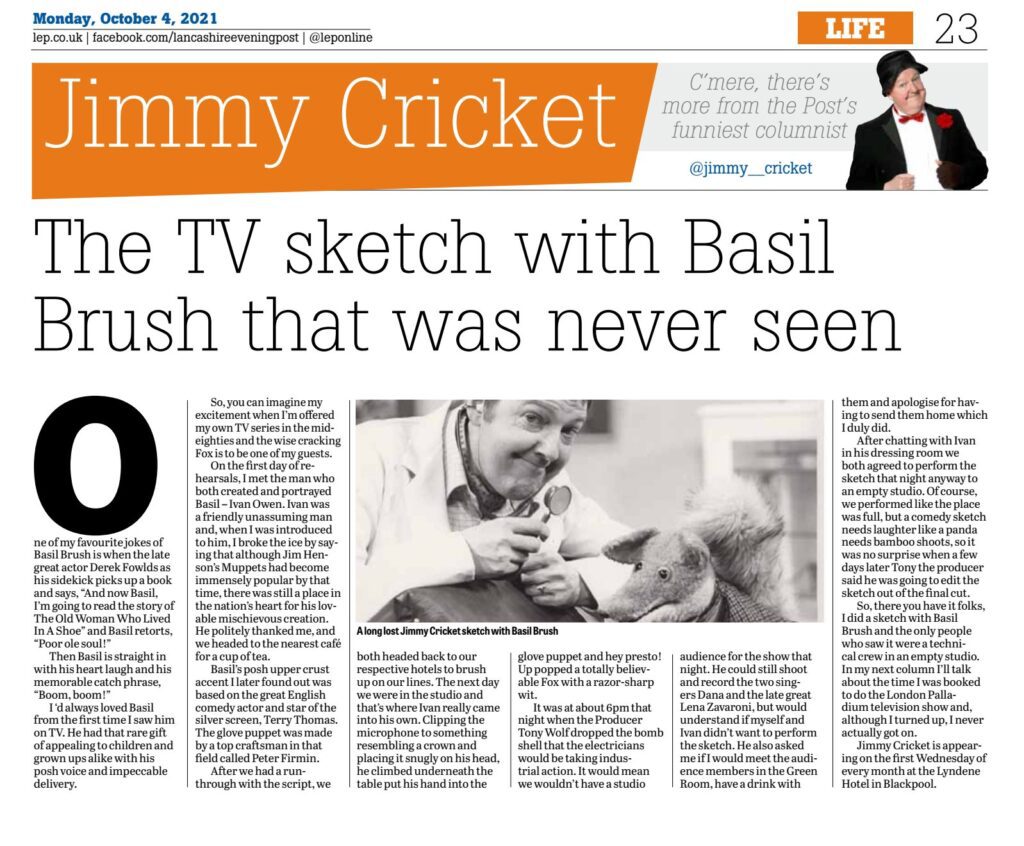 Jimmy Cricket did a TV sketch with Basil Brush in the 1980s – but it was never broadcast.

The popular Northern Irish comic has told readers of the Lancashire Evening Post why the comedy piece did not make it on to the small screen.

Jimmy recalled the story in his latest LEP column.

He posted on social media: “Hi folks! Here’s the true story about the sketch I did with the wonderful @realbasilbrush back in the 1980s that was edited out of the show, for reasons beyond our control!

Basil Brush is a fictional red fox, best known for his appearances on daytime British children’s television since the 1960s.

In his column, Jimmy said: “One of my favourite jokes of Basil Brush is when the late, great actor Derek Fowlds as his sidekick picks up a book and says: ‘And now Basil, I’m going to read the story of ‘The Old Woman Who Lived In A Shoe’.

“And Basil retorts: ‘Poor ole soul!’  Then he’s straight in with his hearty laugh and memorable catch phrase, “boom! boom!”.

“I‘d always loved Basil from the first time I saw him on TV.

“He had that rare gift of appealing to children and grown-ups alike with his posh voice and impeccable delivery.

“So, you can imagine my excitement when I’m offered my own television series in the mid-eighties and the wise-cracking Fox is to be one of my guests.

“On the first day of rehearsals, I met the man who both created and portrayed Basil – Ivan Owen.

“Ivan was a friendly, unassuming man and, when I was introduced to him, I broke the ice by saying that although Jim Henson’s Muppets had become immensely popular by that time, there was still a place in the nation’s heart for his lovable mischievous creation.

“He politely thanked me and we headed to the nearest café for a cup of tea.

“Basil’s posh upper crust accent I later found out was based on the great English comedy actor and star of the silver screen, Terry Thomas.

“The glove puppet was made by a top craftsman in that field called Peter Firmin.”

“After we had a run-through with the script, we both headed back to our respective hotels to brush up on our lines.

“The next day we were in the studio and that’s where Ivan really came into his own.

“Clipping the microphone to something resembling a crown and placing it snugly on his head, he climbed underneath the table, put his hand into the glove puppet and, hey presto, up popped a totally believable fox with a razor-sharp wit.

“It was at about 6pm that night when the producer Tony Wolf dropped the bombshell that the electricians would be taking industrial action.

“It would mean we wouldn’t have a studio audience for the show that night.

“He could still shoot and record the two singers, the wonderful Dana and the late great Lena Zavaroni, but would understand if myself and Ivan didn’t want to perform the sketch.

“He also asked me if I would meet the audience members in the Green Room, have a drink with them and apologise for having to send them home which I duly did.

“After chatting with Ivan in his dressing room, we both agreed to perform the sketch that night anyway to an empty studio.

“Of course, we performed like the place was full, but a comedy sketch needs laughter like a Panda needs bamboo shoots, so it was no surprise when a few days later Tony the producer said he was going to edit the sketch out of the final cut.

“So, there you have its folks, I did a sketch with Basil Brush and the only people who saw it were a technical crew in an empty studio.”

Also read: Visit from Theo the Mouse and Wendy