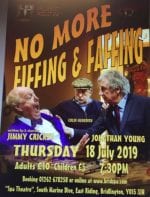 The latest staging of Jimmy Cricket’s comedy play went down very well – and there are more performances on the way!

No more Fiffing and Faffing had such a highly successful debut last September at the Blackburn Empire Theatre, that it has resulted in a tour around the north of England, including at The Met in Bury earlier this year.

Its latest performance was last Sunday (19 May) at the Chorley Little Theatre in Lancashire.

The play will also be performed at the Bridlington Spa (18 July) – see above right – and the Gladstone Theatre in Port Sunlight on The Wirral (6 October).

After the Chorley show, Jimmy tweeted: “Our thanks, from myself and Jonathan and @ColinMeredith52 and Clive goes to Ian and Estelle @ChorleyTheatre and Paul who was on sound and lighting, for today’s two performances of Fiffing and Faffing!

One spectator took to social media to say: “@jimmy__cricket and @ChorleyTheatre That was a great afternoon of entertainment. Laugh a minute, very enjoyable and worth the trip from Rochdale. Great stuff Jimmy & Co.