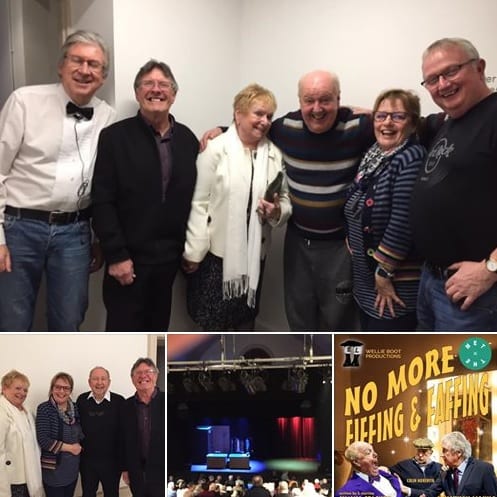 The Met in Bury hosted the play – which had its debut last September at the Blackburn Empire Theatre in Lancashire – on the first leg of a tour of northern England.

It will also be performed at the Chorley Theatre (19 May), Bridlington Spa (18 July) and Gladstone Theatre on The Wirral.

All-round entertainer Jimmy, who wrote the play, also appears in it, along with Jonathan Young from The Bachelors, and actor Colin Meredith, who has made several appearances in ITV’s Coronation Street over the years.

One person posted: “Went to the met theatre in bury to watch one of my favourite comedians Jimmy Cricket amazing thanks Jimmy.”

Another said: “I went also, very funny, enjoyed it.”

Jimmy himself posted the photos above with the message: “Thank you to all the staff at the #TheMet in Bury for yesterday’s production alongside our set designer #KenWilkinson and to all our family and friends, (alongside the little pocket rocket actress #SueDevaney), and the general public who came to see the show. Pictured here backstage with fellow thespians #JonathonYoung and #ColinMeredith and a great friend actress and director #NorrenKershaw whom I worked with on two series for Central Television and on five series for #BBCRadio2 ?.”