Jimmy Cricket sent his annual happy St Patrick’s Day greeting to all his friends and followers across social media.

“And remember… if you want to live longer, find out where you’re going to die and stay away from there.”

Jimmy and his wife May began the celebrations early, performing at the Gladstone Theatre in Port Sunlight on The Wirral.

“It was a joy to return to the wonderful #gladstonetheatre this evening,” said Jimmy on Sunday.

“My thanks to #ChriskaDanceAcademy and Mrs C. and House Manager Valerie, sound and lighting by Ste.

“And thanks also to all the volunteers who made us feel so welcome! #keepvarietyalive.” 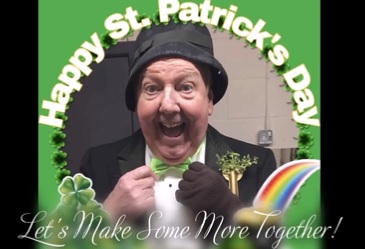 Like Jimmy, singer May Marion, aka Mrs Cricket, hails from the Emerald Isle.

The Gladstone Theatre’s website had promoted the event with the following: “Come and join the comedy legend Jimmy Cricket in this St Patrick’s Day celebration as he celebrates all things Irish.

“Featuring the fabulous May Marion and Ellesmere Port-based CHRISKA Performing Arts School (pictured top right), this really is a celebration not to be missed.”

It is known as The Wirral’s hidden gem.

Subsequently, it became an assembly and recreation hall for entertainment.

Additionally, it has staged political meetings, films, dance and lectures, something it still hosts to this day.

May to sing special song in Gladstone Theatre show

Latest What About You podcast features Jimmy Cricket