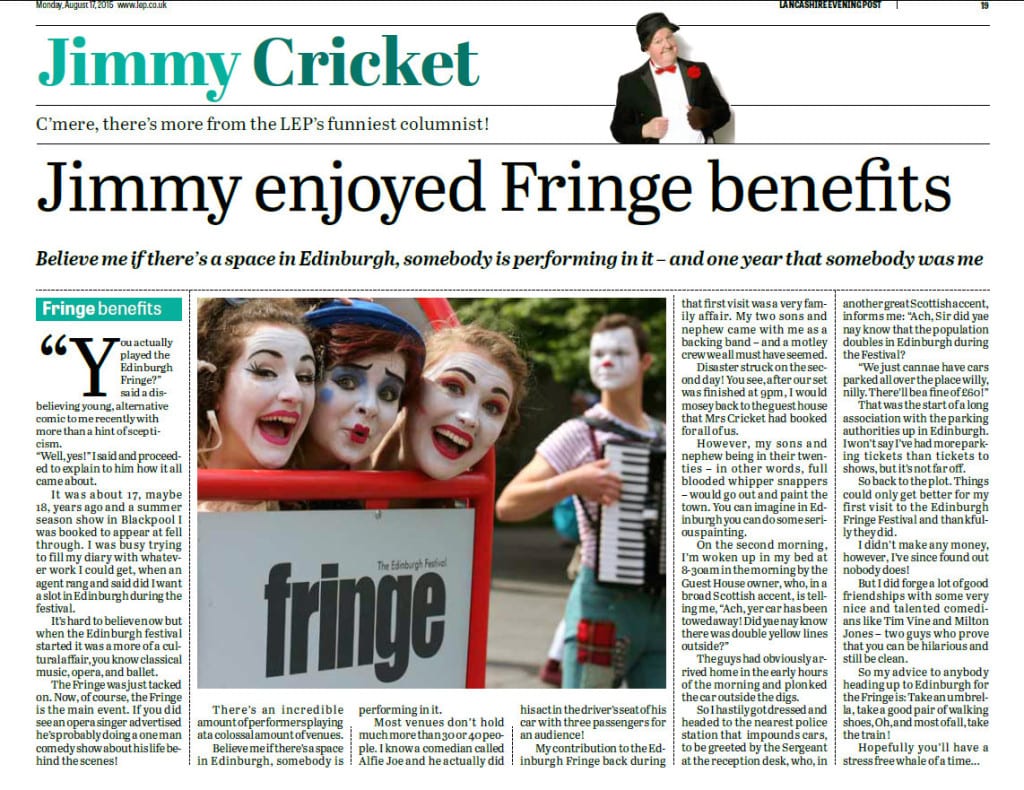 Jimmy Cricket has recalled when he performed at the famous Edinburgh Festival Fringe – and how disaster struck.

Big names from the world of entertainment to unknown artists looking to build their careers take part in the annual festival, with genres including theatre, comedy, dance,  circus, cabaret, children’s shows, musicals, opera and music.

According to Wikipedia, it is the world’s largest arts festival, with the 2014 event spanning 25 days and featuring over 3,193 shows from 51 countries on hundreds of stages.

It takes place every August for three weeks in Scotland’s capital city.

In his latest column in the Preston-based Lancashire Evening Post, famous comedian Jimmy, 69, says how he came to perform at the festival and what happened when he did.

“It was about 17, maybe 18, years ago and a summer show in Blackpool I was booked to appear at fell through,” he explains.

“I was busy trying to fill my diary with whatever work I could get, when an agent rang and said did I want a slot in Edinburgh during the festival.

“My contribution to the Edinburgh Fringe back during that first visit was a very family affair. My two sons and nephew came with me as a backing band – and a motley crew we all must have seemed.

“Disaster struck on the second day! You see, after our set was finished at 9pm, I would mosey back to the guest house that Mrs Cricket had booked for all of us.

“However, my sons and nephew being in their twenties – in other words, full-blooded whipper snappers – would go out and paint the town.”

Jimmy recalls that on the second morning, he awoke to find that his car had been towed away as his sons and nephew had parked it the previous night without realising it was on double yellow lines.

A trip to the police station and a £60 fine later, and Jimmy was able to carry on with his festival performances.

He said he forged a lot of good friendships during his visit to Edinburgh, including well-known comedians Tim Vine and Milton Jones – “two guys who prove that you can be hilarious and still be clean”.